Far beneath the surface of the ocean, deep currents act as conveyer belts, channeling heat, carbon, oxygen and nutrients around the globe.

As global warming increases precipitation in the Weddell Sea, sea-ice patterns are changing and a deep sea current is shrinking.
Credit: Image courtesy of University of Pennsylvania

A new study by the University of Pennsylvania’s Irina Marinov and Raffaele Bernardello and colleagues from McGill University has found that recent climate change may be acting to slow down one of these conveyer belts, with potentially serious consequences for the future of the planet’s climate.

“Our observations are showing us that there is less formation of these deep waters near Antarctica,” Marinov said. “This is worrisome because, if this is the case, we’re likely going to see less uptake of human produced, or anthropogenic, heat and carbon dioxide by the ocean, making this a positive feedback loop for climate change.”

Climate scientists and statisticians have found changing patterns in South Asian monsoons since 1980: more extreme wet and dry spells. In particular, the researchers observed increases in the intensity of wet spells and in the frequency of dry spells. The discoveries are the result of a new collaboration between climate scientists and statisticians that focused on utilizing statistical methods for analyzing rare geophysical events.

Rain falls near a village in the Western Ghats, India. Stanford scientists studied Indian monsoon data for extreme wet and dry spells that occur only a few times a year but have a large impact on agriculture.
Credit: Stephane Pasteur

The discoveries, detailed in the April 28 issue of the journal Nature Climate Change, are the result of a new collaboration between climate scientists and statisticians that focused on utilizing statistical methods for analyzing rare geophysical events. These new approaches reveal that the intensity of… 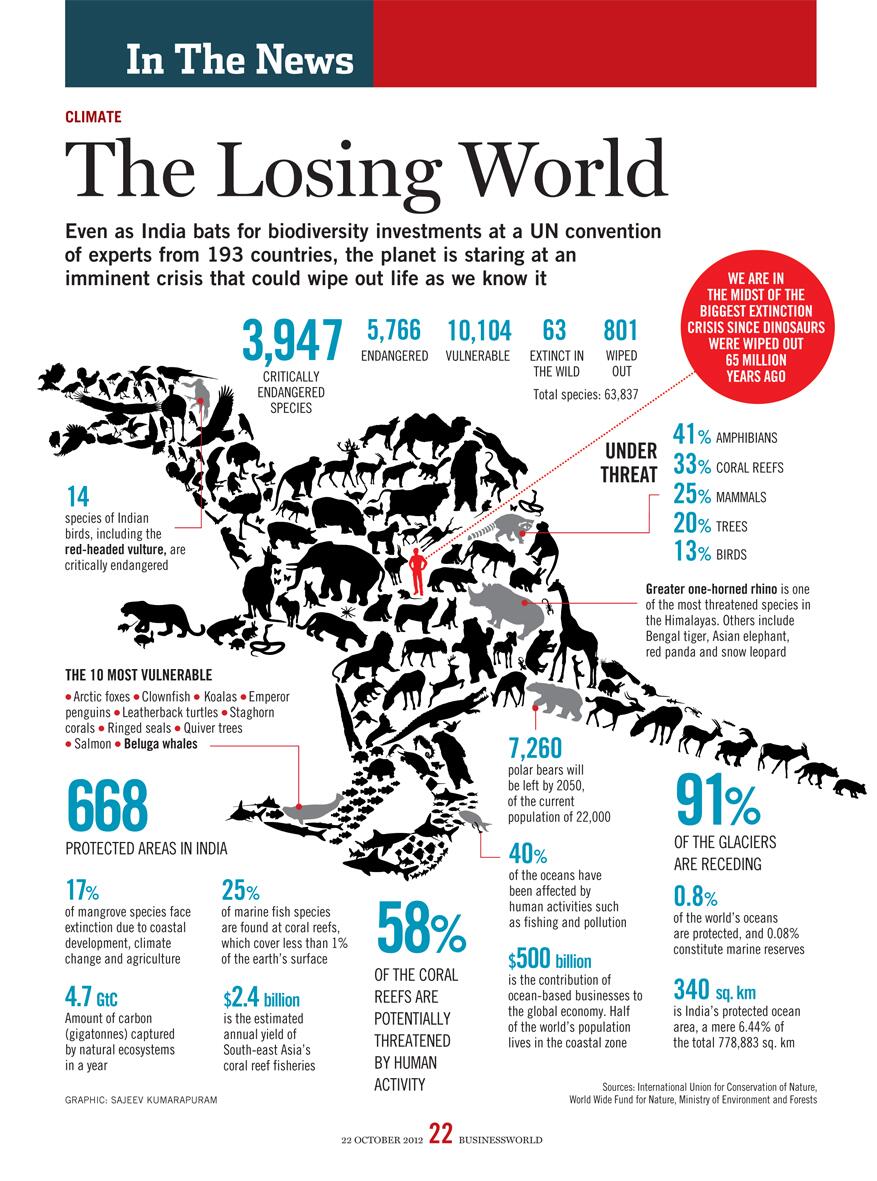 From BusinessWorld, a publication in India:

Even as India bats for biodiversity investments at a UN convention of experts from 193 countries, the planet is staring at an imminent crisis that could wipe out life as we know it.

(This story was published in Businessworld Issue Dated 22-10-2012)
– See more at: http://www.businessworld.in/news/business/environment/the-losing-world/570570/page-1.html#sthash.mmSk4DDw.dpuf

This would be a good poster for geography, biology, general science and world history courses. Can your drafting class print this out for you in poster format?

When all of the “coal mine canaries” on Earth die out, how much longer have humans left to live on Earth?

What hope have we, with yahoos like this leading us in Congress?

The ocean-atmosphere system might well be described as an intricate pirouette between the forces of heat and moisture. Warming and cooling over the ocean and atmosphere alter the rate at which rains fall or lands dry. This interplay, called the hydrological cycle, is a primary governor the world’s weather, playing an integral part in both storm formation and dry spells alike.

As the Earth has warmed by about .8 degrees Celsius since 1880, this cycle of evaporation and precipitation, of drought and deluge at the extremes, intensified by about 6% on average. But this increase was uneven, pushed to even greater abnormalities when both the Earth’s atmosphere and ocean surface experienced periods of either strong warming or relative cooling. It was from this combined uneveness and overall warming trend which arose a number of increasingly severe and dangerous weather events.