The latest essential media poll shows that 58% of Australian’s disapprove of the job Tony Abbott is doing as Prime Minister, and that his first preference continues to fall.

While approval for Bill Shorten and the work that he is doing continues to improve. When it came to who would make a better Prime Minister Bill Shorten was sitting at 40% compared to Tony Abbott’s 36%

When respondents were asked about how fair Australian society is today compared to the past 43% think it is less equal and fair.

Yes you can do two things at once Tony.

Obama signed the Water Resources Reform and Development Act into law last night Australia time. The bill is geared towards putting Americans to work modernizing their water infrastructure and restoring some of their most vital ecosystems while at the same time encouraging economic growth.

This bill gives a green light to 34 water infrastructure projects across the country, including projects to deepen Boston Harbor and the Port of Savannah, and to restore the Everglades.

With Congress’s authorization, these projects can now move forward. In an address before signing the bill the President said “this bill will help towns and cities improve their commerce, but it’s also going to help them prepare for the effects of climate change — storms, floods, droughts, rising sea levels — creating more adaptability, more resilience in these communities.”

He also commented “As more of the world’s cargo is transported on these massive ships, we’ve got…

What Abbott is doing to the environment is criminal.

“Save this planet, it’s the only one with chocolate” Photo: Aaron Watson Real Media One Photos

Editorial – While in Canada this week Prime Minister Tony Abbott stated that he will put money before the environment. It has long been know that the Prime Minister doesn’t believe in climate change and to him big business is far more important then the environment. In 2010 on February the 2nd Tony Abbott said “The climate change argument is absolute crap, however the politics are tough for us because 80 per cent of people believe climate change is a real and present danger.”

Further back in 2002 in a report by the ABC’s 7:30 report he said “I am, as you know, hugely unconvinced by the so-called settled science on climate change.” Most recently he also stated that he would reject and international climate change deal that “clobber the economy”. He also believes…

Scientists investigating one of the greatest riddles of the Earth’s past may have discovered a mechanism to help determine how oxygen levels in the atmosphere expanded to allow life to evolve. 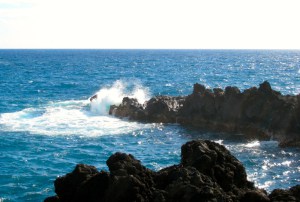 How did oxygen levels in the atmosphere expand enough to allow life to evolve? Researchers may have solved one of the biggest puzzles in geochemistry.
Credit: Copyright Michele Hogan

High concentrations of atmospheric oxygen have been essential for the evolution of complex life on Earth. Over the 4.5 billion years of Earth history, oxygen concentration has risen from trace amounts to 21% of the atmosphere today. However, the mechanisms behind this rise are uncertain, and it remains one of the biggest puzzles in geochemistry.

A research group from the University of Exeter has discovered one possible mechanism, relating to the way in which carbon dioxide is removed from the atmosphere over long timescales.

Sun is the most reliable energy we have.

Great ideas worth a read.

I know I’m part of a very small group in Australia who believe discussions will need to focus on higher density on the coming decades, but all the signs are there. I am certain Australia a century from now will have it’s capital cities and many satellites with densities much the same as places like many of the biggest cities today. A massive rethink on how we envision cities and indeed the “Aussie dream” need to be on the cards sooner or later.

This is excellent fuel for thought. As is;

Making Aussies pay more for fuel to invest in more roads is worthy of a face palm. We will need TOD’s for our growing population. Planning ahead while density is low and land is being chewed up from sprawl makes for excellent timing.