In the middle of last summer came news of a bizarre occurrence no one could explain. Seemingly out of nowhere, a massive crater appeared in one of the planet’s most inhospitable lands. Early estimates said the crater, nestled in a land called “the ends of the Earth” where temperatures can sink far below zero, yawned nearly 100 feet in diameter.

The saga deepened. The Siberian crater wasn’t alone. There were two more, ratcheting up the tension in a drama that hit its climax as a probable explanation surfaced. Global warming had thawed the permafrost, which had caused methane trapped inside the icy ground to explode. “Gas pressure increased until it was high enough to push away the overlaying layers in a powerful injection, forming the crater,” one German scientist said at the time.

Now, however, researchers fear there are more craters than anyone knew — and the repercussions could be huge. Russian scientists have now spotted a total of seven craters, five of which are in the Yamal Peninsula. Two of those holes have since turned into lakes. And one giant crater is rimmed by a ring of at least 20 mini-craters, the Siberian Times reported. Dozens more Siberian craters are likely still out there, said Moscow scientist Vasily Bogoyavlensky of the Oil and Gas Research Institute, calling for an “urgent” investigation.

How awareness can lead to less meat consumption and what GMOs have to do with diversification and risk reduction. Read more.

Readers are aware of two recent high profile announements from Shell and BP, calling for a price on carbon and an enlarged discussion of climate change globally.

I recently watched a long lecture by Angus Gillespie, VP of CO2 for Shell Oil, explaining the need for a price on carbon, and how Shell, and the other major oil companies, are pricing carbon internally in the complete assurance that carbon pricing will inevitably be imposed, and is desirable.
I will be posting that here soon.
For the short version, here’s a 2 minute clip from a recent appearance by Gillespie at San Francisco’s Commonwealth Club.

One way to read this is that it is a much smoother, cleverer attempt to “manage” climate politics, and the burgeoning popular uprising against the fossil fuel industry.

Above, my newest “This is Not Cool” video focuses on the backstory behind “Merchants of Doubt”, the new documentary inspired by Naomi Oreskes’ and Eric Conway’s book of the same name.  The centerpiece of the book is the story of how techniques of science denial perfected in the tobacco industry have been adapted to the broader war on inconvenient science. 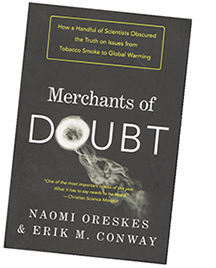 This week’s media firestorm centering on Dr. Willie Soon, a high profile prop at many a gathering of climate deniers, was kicked off by Justin Gillis’ piece in the New York Times on Sunday:

It’s not insignificant that Gillis put the affair in a larger context, something that happens rarely in media coverage of the climate issue.
—

The documents shed light on the role of scientists like Dr. Soon in fostering public debate over whether human activity is causing global warming. The vast majority of experts have concluded…

Speaking at Royal Society event on health and climate change, prince says that failure to act on global warming would be ‘death sentence’ for the planet The Prince of Wales has compared the planet to a “sick patient,” warning it could face its…

Last year, quietly and without much fanfare from the mainstream press, the Pacific Ocean underwent a powerful shift. A shift from a state in which cooler surface waters absorbed atmospheric heat, to a phase in which surface water warming caused ocean heat to be transferred to the world’s already warming airs.

The shift was heralded by a powerful oceanic Kelvin Wave. One that brought warm water up from the depths and spread them across the Pacific Ocean surface. Ever since that time, warm Kelvin Waves have continued to refresh this surface water heat pool.

And so the Pacific Ocean surface warming continued throughout 2014.

By December, Pacific Decadal Oscillation (PDO) values, a measure directly tied to this warming, hit a new all-time record level of +2.51. That’s the highest and… 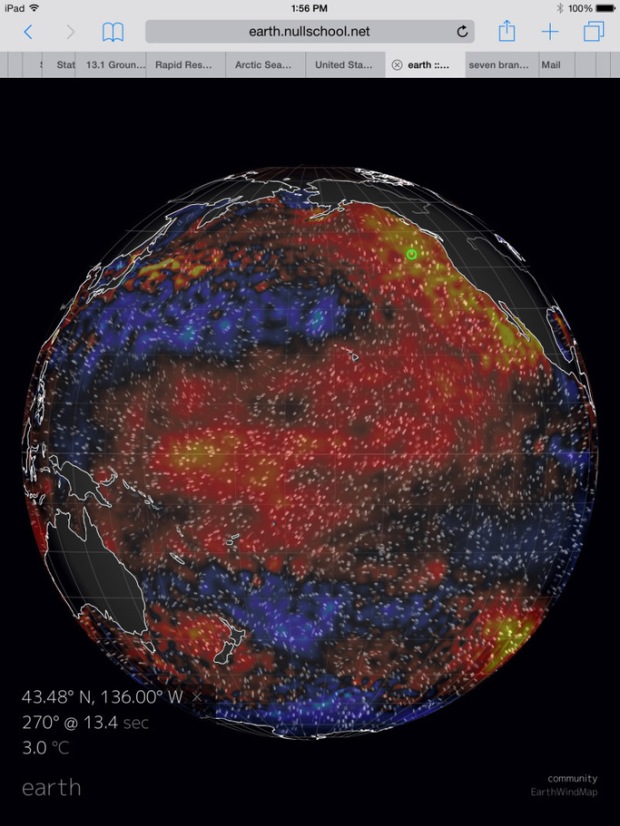 Last year, quietly and without much fanfare from the mainstream press, the Pacific Ocean underwent a powerful shift. A shift from a state in which cooler surface waters absorbed atmospheric heat, to a phase in which surface water warming caused ocean heat to be transferred to the world’s already warming air.

It’s a major swing in Pacific Ocean surface temperatures to a phase where more heat is dumped into the atmosphere. One that is causing some scientists to warn that a new period of rapid atmospheric warming may just be getting started.

GR:  We thought this was coming. 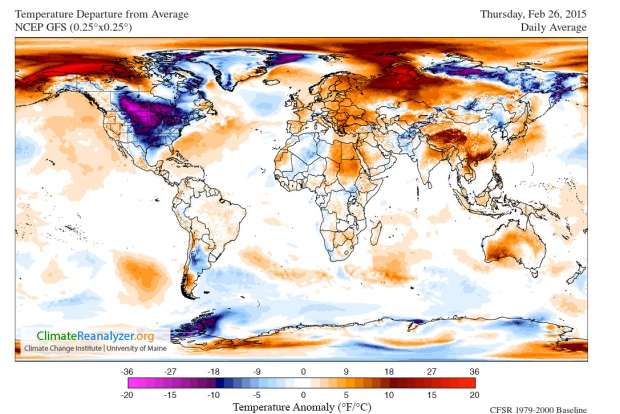 The eastern U.S., as well as parts of Canada, sticks out for having the most unusually cold conditions on the planet.

In fact, much of the rest of North America — including the western U.S., northwest Canada and Alaska — along with most areas of the world, are milder than average. It’s as if the North Pole temporarily relocated to Boston, while leaving the door open for the Southern Hemisphere’s summer to sneak in and evaporate California’s snow pack, while also setting high temperature records all the way into inland Alaska.
–
During just the past seven days, nearly 1,300 cold temperature records have been set or tied across the lower 48 states, most of them east of the Rocky Mountains.

Over the longer-term, the world — and even the U.S. — is still running much milder than average. After the warmest year on record in…

Naomi Oreskes, author of Merchants of Doubt, on finding out that she was being attacked on the floor of the Senate by James Inhofe, the Strom Thurmond of climate denial.

The movie based on Oreskes book comes out next week.

As of late January, the news reports were coming in hot and heavy. Baby sea lions were dying in droves. More than 15,000 of the pups were already lost due to starvation. And with each passing week, more than 100 of the emaciated, beleaguered, hopeless animals were washing up on California shores.

The pups staggered across beaches, wandered into vacant lots, or tottered, disoriented, along roadways. Refugees all to some unspeakable disaster. Orphans lost or abandoned by parents unable to provide them with even the most basic of sustenance. 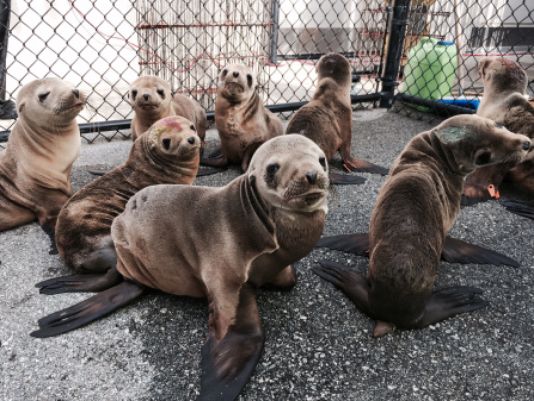 Marine rescue centers, volunteer centers, and even animal shelters were inundated by a flood of desperate, dying animals. Their organs were shutting down. They could barely breathe or walk. The future generation of the more than 300,000 sea lions living along the US…