The UN has launched a new global coalition on health, environment and climate change to reduce the annual 12.6 million deaths caused by environmental risks, and especially air pollution.

At the launch of the coalition last week in Geneva, WMO chief Petteri Taalas urged for greater urgency in implementing the Paris Agreement on climate change to keep the global temperature increase to well under 2°C by the end of this century.

Mr Taalas stressed that the world has a “30 year window of opportunity” to reduce the carbon footprint, reign in greenhouse gas emissions and to switch to clean and renewable energy in pursuit of the “win-win solution” of tackling both climate change and pollution. 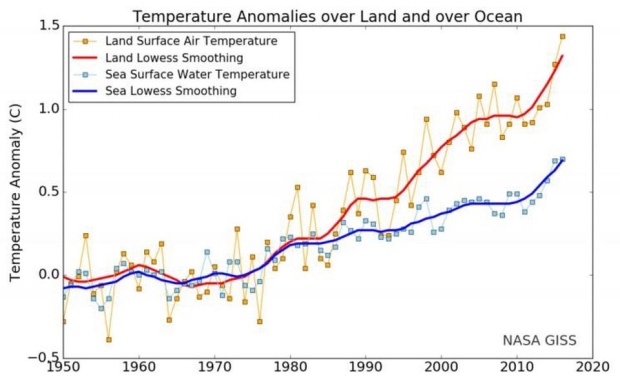 He said the top challenge was in cutting emissions of carbon dioxide, the main gas driving climate change. This remains in the atmosphere and oceans for thousands of years.

Global average concentrations of CO2 in 2017 exceeded 400 ppm, and average temperatures were 1.1°Celsius above pre-industrial levels.

WHO Director-General Tedros Adhanom Ghebreyesus, UN Environment Executive Director Erik Solheim and WMO Secretary-General Petteri Taalas briefed delegates at the annual World Health Assembly on the priorities, opportunities and challenges in the months and years ahead.

According to WHO figures, an estimated 7 million people die prematurely every year from air pollution related diseases, including strokes and heart disease, respiratory illness and cancer. Air pollution in most major cities exceeds WHO air quality standards.

Many pollutants which damage health also harm the environment and contribute to climate change. These include black carbon from diesel engines, cooking stoves and waste incineration, and ground level ozone, which are harmful but are short lived in the atmosphere. It is estimated that reductions in short-lived climate pollutant emissions from sources like traffic, cookstoves, agriculture and industry could help trim the rate of global warming by about 0.5°C by 2050.

“If we speed up on renewable energy solutions, fewer people will die from air pollution. Let’s create a pollution free environment,” he said.

WMO already closely collaborates with both the WHO and UNEP, but within the new coalition called for at COP22 in Marrakesh, WMO (through national meteorological services) will strengthen action specifically targeting health protection from environment and climate change related risks.

This will be through better provision of climate services such as seasonal outlooks and can improve management of climate-sensitive diseases like cholera and malaria, heat-health warnings against the growing problem of heatwaves, and multi-hazard early warning services against high-impact events like tropical cyclones.

The coalition begins with a joint focus on Air Quality outlining five areas of joint work. WMO’s observing network, its Sand and Dust Storm Warning, Advisory and Assessment System (SDS-WAS) and its Global Atmosphere Watch stations, which monitor the atmosphere, will be underpinning to the global drive to improve air quality mapping and monitoring.

The SDS-WAS can play an important role in knowing when and where dust storms may occur, to allow health partners to plan more effectively and benefit from WMO global atmospheric monitoring and forecasting capacity on acute episodes of hazardous air quality – such as dust storms.

The new global coalition on health, environment and climate change will seek to pool expertise and achieve greater coordination. One of the most immediate outcomes of the coalition will be a Global Conference on Air Pollution and Health, which will take place in Geneva 30 October to 1 November.