Young people will be left to pick up the bill for climate change because politicians are dodging the issue, a UK report warns.

The government must act faster to cut carbon dioxide (CO2) emissions from road traffic, homes and farming, the Committee on Climate Change says.

Without action, the coming generation will have to pay much more to curb emissions in a heating world.

The government says it is committed to being a world leader on climate change.

It will introduce its low-carbon transport plan soon.

Why does this matter?

The advisers are “acutely concerned” at the UK’s lack of progress in cutting the carbon emissions overheating the planet.

The committee says the UK made a good start with the power industry but emissions cuts have effectively stalled in the past five years.

Members say it will be much cheaper, for instance, to begin a steady changeover to electric cars now than to have to rush the technology in years to come.

A manifesto to save Planet Earth (and ourselves)

• Power: The electricity industry is a star performer. Emissions from power generation have more than halved (-55%)

• Waste: Emissions from waste are down by almost a quarter (-23%)

• Transport: The villain is transport, where emissions have actually gone up (+3%)

Why is the power industry best?

Coal power stations in the UK are being phased out – they are the worst polluters.

Renewables have proved far cheaper than anyone thought.

The government has banned subsidies for onshore wind – even though analysts say that will add to energy bills. In addition, communities have been given the say as to whether they can go ahead or not. This means that just a few objections are needed to block the progress of wind projects.

But the committee says onshore wind and solar will be even cheaper than burning gas for electricity in the 2020s.

How has the waste industry cut emissions?

If it’s dumped in a landfill, food and plant matter will rot and create methane, which contributes to climate change.

Councils have been asking people to separate food and garden waste from general waste.

Now, companies are increasingly trying to capture methane from food waste and harness it to make useful biogas.

But after a good start, emissions cuts are stalling. 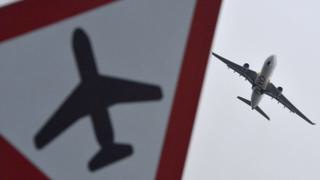 Emissions from transport have bucked the trend and gone up

What’s up with farming?

Making fertiliser emits greenhouse gases. And so does spreading animal dung on the fields to help crops grow.

Farm machines pollute. And cutting wood for farms is problematic for the climate too, because trees soak up CO2.

Why are transport emissions going up?

The government removed the fuel duty incentive for low-pollution cars, so now a Porsche can be taxed at the same rate as a clean Toyota Prius.

What is more, concern about pollution from diesels has shifted some drivers to petrol cars.

The committee says sales of electric cars and installation of charging points are both too slow.

What are the other challenges?

Getting people to insulate their homes to save wasting heat is a big challenge.

The committee says insulation rates in homes are 95% lower because of grants cuts.

It wants ministers to insist that all new homes are zero-carbon.

We also have to start experiments on a large scale with actually capturing the CO2 gas from industry and storing it in rocks underground, it says.

Why is the government struggling to cut emissions?

The committee says part of the problem is that responsibility for cutting emissions is split between various government departments.

They don’t all see tackling climate change as a key priority.

But a spokesperson for the UK government said: “We’ve proven ourselves to be world-leaders in tackling climate change – cutting emissions faster than any other G7 country and producing record levels of low carbon energy.

“We’re confident of cutting emissions across the wider economy to meet our carbon budgets while seizing the economic opportunities of clean growth.”

What can you do if you are concerned about the climate?

They maybe walk or cycle instead of taking the car – and they try to insulate their homes or turn the heating down.

They recycle too – but that probably helps less with the climate than many people think.