Along with their latest dire predictions, the world’s leading climate scientists offered a new path forward—but will anyone take it?

When the Intergovernmental Panel on Climate Change (IPCC) published a new special report last week, it came with both good news and bad.

The good news is that the carbon budget for staying under 1.5 degrees Celsius of warming is larger than we thought, so we have a bit more time to act.

The bad news is that the consequences of overshooting that threshold are very, very bad.

The catastrophes that we once believed would be triggered by only 2 degrees of warming are likely to occur at this lower threshold, including widespread collapse of food yields and extreme levels of human displacement.

The IPCC has issued a clear and trenchant call for action—its most urgent yet.

It says we need to cut annual global emissions by half in the next 12 years and hit net zero by the middle of the century.

It would be difficult to overstate how dramatic this trajectory is.

It requires nothing less than a total and rapid reversal of our present direction as a civilization.

The challenge is staggering in its scale, and the stakes are even more so.

As the co-chair of an IPCC working group put it, “The next few years are probably the most important in our history.” After decades of delay, this is our last chance to get it right. 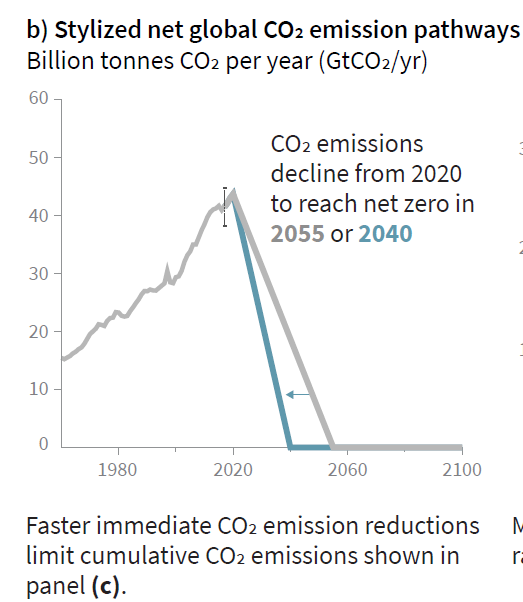 Most people hope that we’ll be able to prevent catastrophe by rolling out clean energy systems, ultimately decarbonizing the economy. But so far this plan has not been working very well.

Global emissions continue to rise, year after year, and the peak is nowhere in sight. Even with the Paris climate agreement in place, adding up all of the pledges that the world’s governments have made, the IPCC predicts that we’re headed for as much as 3.4 degrees of warming.

The destruction will be unimaginable.

It’s not for lack of trying.

Of course, we must try much harder, but the problem is that economic growth is devouring our best attempts to decarbonize.

The economy is expanding much faster than we are able to transition to clean energy. We’re fighting an uphill battle, and we’re losing.

Think about it this way.

The IPCC says we need to cut emissions to net zero by the middle of the century. But during that very same period, the global economy is set to nearly triple in size.

That means three times more production and consumption than we are already doing each year.

It would be hard enough to decarbonize the existing global economy in such a short timespan.

It’s virtually impossible to do it three times over.

In Australia emissions are rising since the LNP government axed the price on carbon.

If we carry on with growth as usual, then cutting emissions in half by 2030 would require that we decarbonize the economy at a rate of 11 percent per year.

For perspective, that’s more than five times faster than the historic rate of decarbonization and about three times faster than what scientists project is possible even under highly optimistic conditions. If we roll out a towering carbon tax and massive subsidies for clean energy, we might be able to decarbonize by 3 to 4 percent per year, but that’s nowhere near fast enough.

This is a problem, and the IPCC knows it.

The special report sets out several possible scenarios for keeping us under 1.5 degrees.

Most of them assume that we continue growing global industrial output. And because this makes the challenge so difficult, they rely on speculative “negative emissions” technologies to save us.

We can go ahead and pollute now (exceeding the carbon budget twice over) so long as we figure out a way to suck that carbon back out of the atmosphere later in the century.

The plan the IPCC has in mind is called BECCS, which stands for “bioenergy with carbon capture and storage.” The idea is to grow massive plantations around the world to absorb carbon dioxide, turn those crops into biofuel, burn it in power stations, capture the carbon dioxide that’s emitted from the smokestacks, and store it deep under the ground. Voila: negative emissions.

Politicians love it because it suggests that we can prevent climate catastrophe without having to make any major changes to the economic status quo.

It’s a kind of get-out-of-jail-free card.

But there are problems.

First, we have no evidence that the technology will work at scale.

If it doesn’t, we’ll be locked into a high-temperature pathway that’s impossible to escape.

That’s why Kevin Anderson and Glen Peters, two of the world’s leading climate scientists, have argued that relying on BECCS is “an unjust and high-stakes gamble”—a major moral hazard. It lulls us into postponing real action, with potentially disastrous consequences.

Even if BECCS does work at scale, we’ll bump into other problems.

For one, it would require devoting huge tracts of agricultural land to biofuels, with plantations equivalent to twice the size of India.

Not only is this likely to drive severe food shortages, but it would also be an ecological disaster.

A team of researchers led by the German scientist Vera Heck has found that BECCS would trigger a 10 percent loss of global forest cover and a 7 percent collapse in biodiversity, exacerbating existing crises while causing widespread water scarcity and soil depletion.

Scientists have been lining up to sound the alarm. In 2014, 15 scholars attackedthe credibility of BECCS in the prestigious journal Nature Climate Change. The following year, another 40 scholars argued in the same journal that reliance on BECCS was “extremely risky.”

This year, the European Academies’ Science Advisory Council, a body that brings together the national science academies of all EU member states, published a report condemning the IPCC for relying on BECCS and other negative emissions schemes. The consensus on this is now rock-solid.

The IPCC is finally getting the message.

Last week’s special report includes an exciting new scenario that—for the first time—does not rely on speculative technology. Developed by an international team of scientists, it projects that we can reduce emissions fast enough to keep under 1.5 degrees but only if we’re willing to fundamentally change the logic of our economy. Instead of growing industrial output at all costs, it proposes a simple alternative: that we start to consume less. 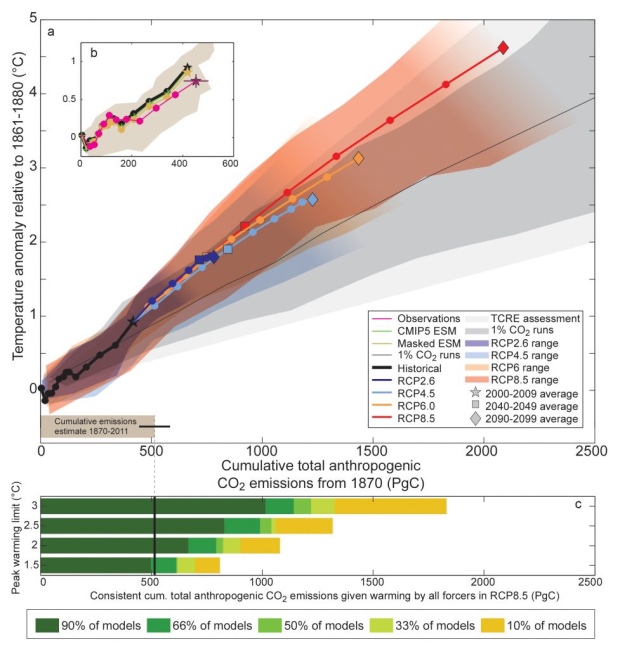 The new IPCC model calls for us to scale down global material consumption by 20 percent, with rich countries leading the way.

It means moving away from disposable products toward goods that last.

It means repairing our existing things rather than buying new ones.

It means investing in public goods and finding ways to share stuff—from cars to lawn mowers—shifting from an ethic of ownership to an ethic of usership.

Reducing our industrial output will slash our need for energy, making it much easier to decarbonize the economy in time to avert climate breakdown.

What’s more, scientists say it’s also our best hope of reversing other aspects of ecosystem collapse. And because this scenario doesn’t require giving land over to BECCS, it leaves lots of room for reforestation, ending poverty and hunger, and improving biodiversity.

How do we get there?

The first step would be to impose caps on resource consumption.

We could also roll out laws against planned obsolescence and encourage long-lasting design and recyclability by having businesses take back defunct products.

We might even think about getting rid of public advertising, as São Paulo has done, liberating people from the psychological pressure to consume unnecessary stuff.

There are dozens of ideas we could consider.

This approach requires evolving beyond the rigid constraints of capitalism.

Whatever else capitalism might be, it is ultimately a system that is dependent on perpetual growth, which places immense pressure on our living planet.

Such a system might have seemed reasonable enough when it first emerged in the 1800s, but in an era of ecological breakdown, it just won’t do.

The good news is that rich countries no longer need aggregate growth.

In a recent statement to the European Union, 238 scientists argued that we can improve people’s lives and provide meaningful work right now, without any growth at all, simply by distributing what we already have more fairly.

That might sound politically difficult, but large majorities of people in middle- and high-income countries say they want a new economy—one that’s less dependent on growing consumption and better suited to the realities of the 21st century. Now is the time to build it.