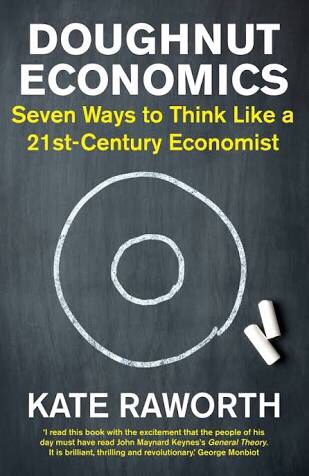 This weekend the G20 are meeting in Argentina, with the aim (they say) of ‘building consensus for fair and sustainable development’. Since they collectively generate 85% of global GDP, whether they do or don’t transform their economies will profoundly affect us all. So how close to the Doughnut’s safe and just space are the G20?

Here’s one way of assessing it, using the pioneering national doughnut analysisby Dan O’Neill, Andrew Fanning, Julia Steinberger and Will Lamb at the University of Leeds. Using the best-available, internationally comparable data, they scaled the global concept of the Doughnut down to the national level for over 150 countries (only including those for which there were sufficient data – as a result, Saudi Arabia is unfortunately missing from this G20 analysis. The EU28 group is also not available for this analysis).

In essence, national doughnuts aim to reflect the extent to which a country is meeting its people’s essential needs while at the same time ensuring that its use of Earth’s resources remains within its share of the planet’s biophysical boundaries.

Since Argentina is hosting the talks, let’s take its national doughnut as an illustration. The aim is to fill the centre circle in blue, while not overshooting the green ring of the biophysical boundary. Like many countries worldwide, Argentina is both falling short on some social dimensions while already overshooting multiple biophysical boundaries. 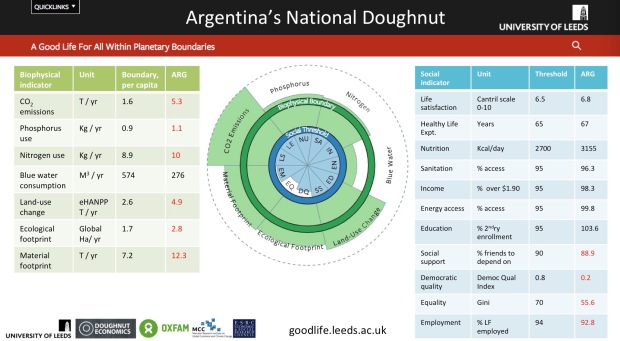 The methodology for these national doughnuts is a work in progress, of course, but the indicators and data underlying them are improving year-on-year, and when taken as an overview of 150 countries, the initial analysis reveals some valuable 21st century insights.

In the chart below (made in collaboration with Andrew Fanning), humanity’s sweet spot – living in the Doughnut – lies in the top left-hand corner: a place where all social thresholds are met, without transgressing any biophysical boundaries. 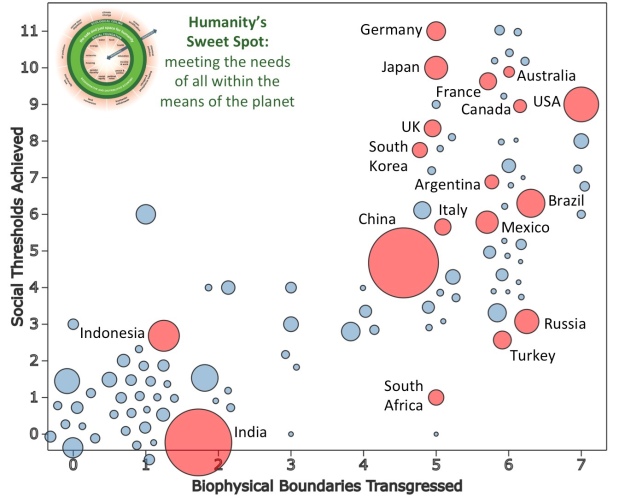 So what does this 150 country overview reveal? Three insights jump out.

1. We are all developing countries now. The Doughnut challenge turns all countries – including every member of the G20 – into ‘developing countries’ because no country in the world can say that it is even close to meeting the needs of all of its people within the means of the planet. (If you are wondering which is that one country closer than the rest, it’s Viet Nam – but is it heading for the Doughnut, or moving straight past it?)

2. New development pathways need new names. There are currently three broad clusters of countries making very different 21st century journeys, as labeled in the version of the diagram below: 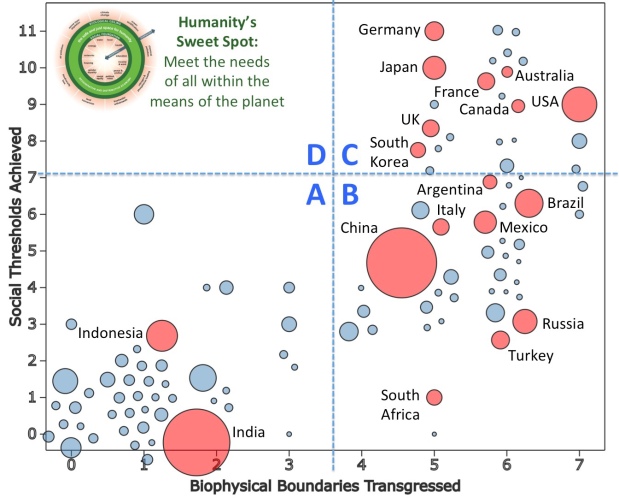 A. Countries that are barely crossing any planetary boundaries, but are falling very far short on meeting people’s needs, including G20 members India and Indonesia. The development path that these nations must now pursue has never taken before. Copying the degenerative industrial path of today’s high-income countries (Group C), would most likely collapse Earth’s life-supporting systems.

B. Many middle-income, ‘emerging’ economies – including G20 members like Brazil, Russia, China, Argentina and South Africa – are both falling short on social needs while already crossing biophysical boundaries. These countries are now making future-defining investments in urbanization, energy systems and transport networks. Will these infrastructural investments take them further away from the doughnut, or start bringing them towards it?

C. Today’s high-income countries ­– including G20 members like the US, UK, France, Germany and the EU 28 itself – cannot be called developed, given that their resource consumption is greatly overshooting Earth’s boundaries and, in the process, undermining prospects for all other countries. These high-income nations, too, are on an unprecedented developmental journey: to sustain good living standards while moving back within Earth’s biophysical boundaries.

D. No country is yet in sweet-spot cluster D (for Doughnut!) – so how many years until some are there, and which will make it there first?

Given that the labels ‘developing’ and ‘developed’ no longer make sense in the 21st century context, how can we best rename these four clusters of countries? In comments on this blog, and on Twitter, please do share suggestions for inventive and memorable names for these very different country clusters facing the Doughnut challenge. Naming is framing, so let’s rename and reframe the future of development…

3. Transformative goals demand transformative approaches. Given that none of these three development paths have been pursued before – let alone have yet been achieved – it would be bizarre to think that last century’s economic theories, policy prescriptions and business models would equip us for what lies ahead. Getting into the Doughnut is our generational challenge and it demands transformational mindsets, models and action in economics, policymaking, and business.

As the world’s major economies, the G20 should be leading this transformation, with countries starting in all three country clusters. But since a key current criterion of G20 membership is having a large GDP, each country is geopolitically locked in to pursuing GDP growth to keep its place in the annual G20 Family Photo. So for leadership on the Doughnut Challenge, look, instead, to the Wellbeing Economy Governments, or #WeGO, an emerging grouping of countries – among them New Zealand, Scotland and Iceland – that are focusing on economic wellbeing and have a far greater chance of putting regenerative and distributive policies into practice.

Let me leave the G20 with the question that this summit should be asking: 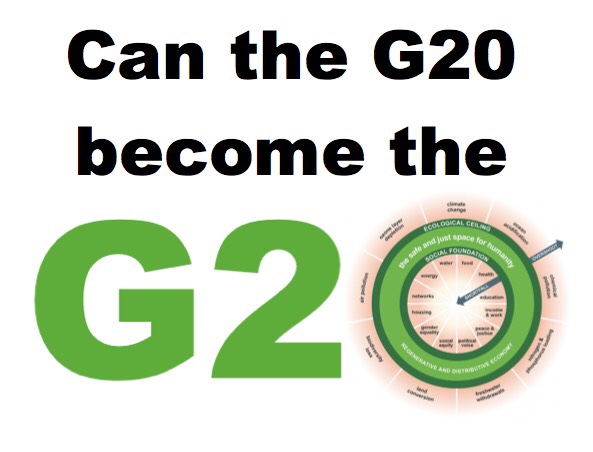