It’s been little over a month since newly-elected Congresswoman Alexandria Ocasio Cortez joined some 200 young climate activists for a sit-in in soon-to-be House Majority Leader Nancy Pelosi’s office to demand that Democrats back a Green New Deal, a plan to transform the U.S. energy economy in order to stave off climate change and promote greater equality.

Since then, support has ballooned for the revolutionary policy plan, with 38 Congresspeople now pledging to back a select committee to develop it, and to renounce donations from fossil fuel companies, according to the latest tally from the Sunrise Movement.

But what do voters think?

That is what the Yale Program on Climate Change Communication set out to determine with a survey shared with 966 registered voters between Nov. 28 and Dec.11. The results, published Friday, show that the idea has “overwhelming support” from voters of all parties.

The survey gave a brief explanation of the Green New Deal and then asked respondents, “How much do you support or oppose this idea?”

Eighty-one percent of registered voters either “strongly” or “somewhat” supported it, and, while support was stronger among Democrats, a majority of Republicans were also in favor.

However, there is a catch: The survey did not mention that the Green New Deal has so far been promoted by progressive Democrats like Ocasio-Cortez.

The Yale Program on Climate Change Communication explained why this could alter Republican support as the deal and its proponents gain more national attention:

Therefore, these findings may indicate that although most Republicans and conservatives are in favor of the Green New Deal’s policies in principle, they are not yet aware that this plan is proposed by the political Left. For any survey respondents who were previously unaware of the Deal, it is likely that their reactions have not yet been influenced by partisan loyalty.

The survey also showed that most of its respondents had not heard of the deal.

Before it offered its paragraph of explanation, the survey’s authors asked if respondents had heard of it. Eighty-two percent answered that they had heard “nothing at all.” 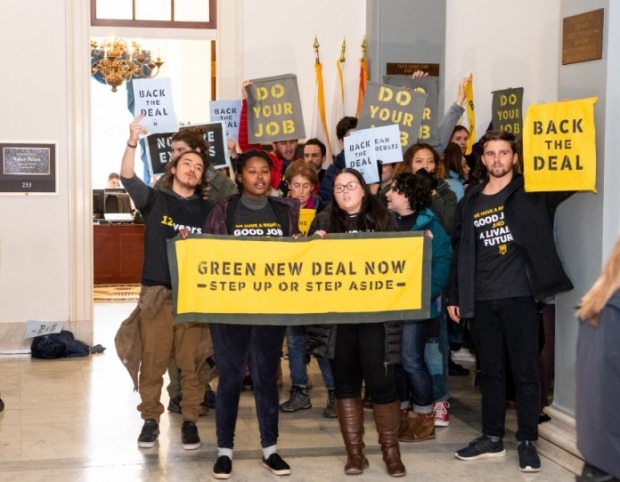 For Yale postdoc Abel Gustafson, who co-authored the report on the survey’s findings, the challenge for the deal’s proponents is how to spread awareness in a way that does not alienate potential supporters.

“Given that most Americans have strong support for the components and ideas of the Green New Deal, it becomes a communication strategy problem,” Gustafson told The Huffington Post. “From here, it’s about how you can pitch it so you can maintain that bipartisan support throughout the rest of the process.”

Another survey from Data for Progress also found broad support for a green jobs program, with 98 percent of loyal Democrats and 66 percent of loyal Republicans on board, The Huffington Post reported.